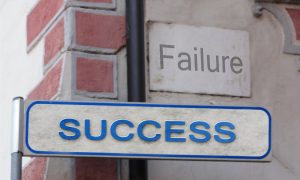 Fear of failure is something most of us face. It comes from a lot of different places. Maybe we had parents who never saw the things we accomplished as good enough. Maybe we have genuinely made some mistakes and are afraid of reruns. Perhaps we have lacked confidence in who we are for a long time and are simply too afraid to take the next steps. Fear of failure is real. However, it can be overcome.

Overcoming fear of failure is simple in some ways. We have to think differently. However, the process of thinking differently is hardly simple. If it were, we would have done it by now. Admittedly, though I am a mental health professional and I help people think differently for a living, this is hard for me too. One of the problems is identifying what thought patterns and processes I need to change. By the way, this is true for nearly every change we want to make.

Here are some thoughts to help you overcome the fear of failure and move you toward what you actually want in life rather than being stuck where you are.

We have a tendency to compare our first attempts at something to what we believe should be the final product. I heard someone say, “We tend to compare our bloopers to everyone else’s highlight reel.” How true! Remember, the first draft is usually imperfect. It is an opportunity to improve.

Michael Hyatt said in his podcast, “Why it’s time for you to stop trying,” that saying we will “try” is a way to fail with dignity. In essence, he says using the word “try” assumes a high likelihood of failure. Stop trying and start doing. To do something is a decision to put in full effort. To try adds in an assumption that I probably won’t succeed. Do it.

If you do something and it doesn’t work, you didn’t succeed that time. However, you did get feedback on what parts worked and what parts didn’t. Thomas Edison said, “I have not failed. I’ve just found 10,000 ways that won’t work.” Feedback is a very important part of the path to succeeding at anything. It’s not failure – it’s feedback. Waiting or deciding to not do whatever it is your fear of failure has kept you from is a sure-fire way to stay where you are. 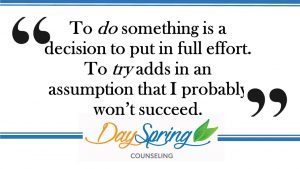 So What if it Doesn’t Work?

Let’s assume you don’t get it right the first, second, or third time. You did something. That’s valuable. At a minimum, it will lead you to your next project. You will know more about that particular “thing” than you did before. You will have insights you didn’t have. You will even understand yourself and your abilities better. In fact, you might even find out you didn’t really want to do that thing at all.

Fear makes you human. We all have it. Fear of failure keeps us paralyzed. One thing is certain, regret of not doing is stronger than the fear of failure. Take a look at your thoughts about failure. Modify those that keep you stuck. You may still have some fear, but you will be doing instead of being stuck.

What ways have you overcome fear of failure? Let us know with your comments. We would love to hear from you!