Body Image Problems Can Be Rather Serious 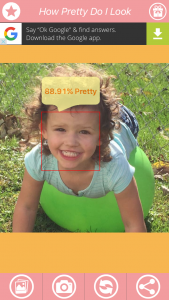 Body Image Problems Can Be Serious

So I was looking for an app the other day and ran across an app called “How Pretty Am I.” I was intrigued. I downloaded it and used various pictures on my phone to see what this app had to say about how pretty I am as well as others in photos on my phone. Turns out, I’m reasonably pretty (over 80% every time). If you disagree, that’s fine – leave a comment below! But my interest was more about body image than anything else.

As you can see to the right, this beautiful little girl, who happens to be my daughter, is said to be 88.91% pretty. This was according to the app and the image is a screenshot from that app. According to her father (me), she’s 100% beautiful! The creation of an app of this sort highlights the problems many people have with body image. I didn’t use a lot of different photos, but I imagine it wouldn’t rate anything very low and probably throws out random numbers above 80%.

Body image, like many things, can be either positive or negative. At best, this particular app is a self-esteem booster. At worst, it serves as a means of comparing ourselves to others, whether real or not, in an effort to look better than someone else. This constant comparison of outward appearance can lead to body image problems. 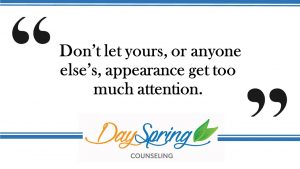 Body image problems can be serious. Most of us have an idea of how we want to look. Many people never get there. The “ideal” is always changing and even changes from culture to culture or even subculture to subculture. Greatist.com has developed a decade-by-decade look at how the “ideal” female body has changed over the last 100 years. You can find that here.

For young females, body image problems can lead to eating disorders, anxiety, depression, and a host of other issues. When we compare ourselves to “ideal,” we are making a comparison that hardly anyone could ever match up against. There are others, but here are 4 common signs of body image problems:

If you believe you have any of the following problems, you should see a mental health professional as soon as possible:

These symptoms may be signs of an eating disorder.

Can you improve your body image? Yes! Here are some things to help. I credit Dr. Mary E. Pritchard for the first two suggestions below.

Don’t get sucked into media pressures to look any certain way. Don’t let yours, or anyone else’s, appearance get too much attention. Looks really aren’t that important.

Have you experienced problems with body image? What things helped you overcome it?