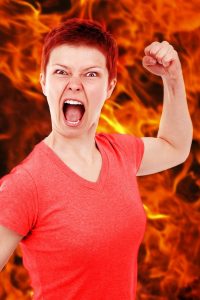 We sometimes harm relationships by taking things personally that have nothing at all to do with us. I was listening to a lady talking about her husband this morning. She said they were about to eat breakfast and she was cooking. She had made eggs and waffles. She asked her husband, “Would you like a waffle?” His response was, “No. I don’t want the extra calories.” Seems reasonable, right? A normal conversation. However, what the wife heard was, “You’re fat! You make poor food choices! You should do better at watching what you eat!”

How often are you taking things personally when they have nothing to do with you? Of course, you probably can’t answer that question. Neither can I. We interpret things in ways that confirm what we believe about ourselves. During the breakfast turmoil inside this woman’s mind, we can see this taking place.

This cycle happens all the time. We make assumptions about what others are saying about us when they’re not talking about us at all. We end up taking things personally because of our beliefs. Notice, our beliefs cause this – not what the other person said.

Learning to hear what the other person said without filtering them through our faulty beliefs will result in better relationships. The woman in the true story above said she always had a bad day and was short with her husband when she interpreted things that way. Think about it. How much more defensive are we when we believe someone disapproves of us? Learning to take things as they are said rather than assuming some negative personal meaning will help us have better relationships with everyone, including our family.

If you find yourself taking things personally often, consider these points…

What did the person say?

What did the person actually say? Did they include a direct statement about you?

Notice, what the person actually said does not include the part your beliefs added in. Believing the person actually meant something about you when they didn’t say so is accusing them of being dishonest. Really! Back to our example. If the husband meant, “You’re fat,” he was being dishonest about his motives. He really wanted a waffle but wanted to set an example for his wife hoping she would follow his lead. This is a pretty big stretch. It requires making a lot of assumptions about the other person. Primarily, they’re dishonest.

Learning to hear what the other person said without filtering them

through our faulty beliefs will result in better relationships.

What evidence do you have this person is talking about some characteristic of yours in the first place?

In our example, the husband had never once told his wife she was overweight. He never suggested that she lay off the carbs. He never stated at any time that she needed to be more disciplined and make better choices. The truth of this situation is this – the only evidence was what the woman already believed about herself. When we’re taking things personally that have nothing to do with us, we are actually twisting the other person’s words to fit our beliefs.

What does the twisted meaning confirm?

Here’s the most important part. What does twisting the meaning of the other person’s statement confirm for me?

We misinterpret others, most often, because we twist the meaning of what they said into something that confirms a negative belief about ourselves. At the end of the day, it’s my beliefs that cause me difficulties – not innocent statements from other people. Examine your beliefs. These are the real source of the problem.

How have these types of issues impacted your relationships? Feel free to comment. We would love to hear from you!