Rebounding After a Failed Attempt 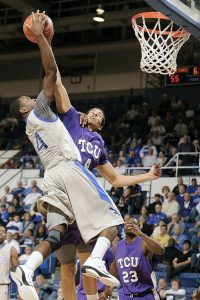 Wilt Chamberlain was an unbelievable rebounder. He had more total rebounds than anyone else in NBA history with 23,924. Second is Bill Russell with 21,620 and Kareem Abdul-Jabbar is a distant third with 17,440. The numbers get closer together once you get past this position on the list. These men were phenomenal rebounders.

How about you? How are your rebounding skills? How well do you get the ball after you miss? Do you get up and take the second chance? Is taking another shot even on your mind? Rebounding is the art of taking possession of the ball after a failed attempt. It’s not letting failure be final.

We all miss, right? Kobe Bryant, one of my favorite NBA players (I can’t help it, I’m a Lakers fan!), has missed more field goal attempts than anyone else over his career. Yet, he will still be a hall of fame inductee at some point in his life. Missing the mark is part of life. If we’re doing anything at all, we’re going to miss it sometimes. The most important question is what we do after we miss.

When we fail, it’s hard to get the energy to even want to try again, much less actually do it. What were we going after in the first place? There had to be something that was worth the effort. When we were starting, it was important. There was something about it that made it worth the struggle and hard work. When we fall short, we tend to get the idea that maybe it wasn’t worth it after all. It’s not worth this much effort. Of course, when we started, we weren’t thinking about doing it twice!

If you are waiting on success before you have commitment, you probably won’t have either.

The truth is, we went about some part of it incorrectly. Maybe we didn’t execute some part well. Maybe we were going about something from the wrong angle. Whatever the case, we didn’t want to be here starting all over again. I have some great news for you! You’re not starting over again!

The truth is you know more than you did the first time. You are better trained – even if the training came from an unsuccessful attempt. You are also wiser. You know some steps to definitely not take this time. You probably even know what went wrong.

Learn from your failed attempt and get the ball. Fortunately, for us, getting the ball doesn’t mean wrestling the rebound away from a 7-foot giant of a man. We simply have to believe that it’s worth another shot. If your effort was worth the outcome the first time, then it still is. The outcome you were searching for is just as awesome as it ever was. Commit to taking another shot.

Commitment has to come before success. In fact, if you are waiting on success before you have commitment, you probably won’t have either. Commit the effort necessary beforehand. For most things, we don’t have the option of putting in half-hearted effort until we see if something works. We need to commit! We cannot afford to adopt an idea of “try it a little and see how it works.” Success will only come when we commit the effort necessary to being about the outcome we were looking for.

What kinds of things have helped you take another shot after a failed attempt at something? Feel free to comment. We would love to hear from you!