Goals and Action Plans are Better than Resolutions 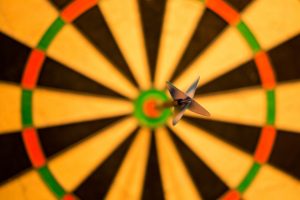 Tomorrow is the first day of 2016. Many people look at the New Year as a time to start something different. They make resolutions to be different. They see this time as an opportunity to improve their lives. In thinking about this, there are some things we need in order to actually keep our resolutions. Resolutions have to be important enough to keep us motivated and we need to have the competence and skills to achieve them. However, resolutions generally don’t have specific goals and action plans attached to them.

Frankly, I don’t like the word “resolution.” Resolutions tend to be vague statements of things we want to change and they’re rarely kept. Only 8% of people actually keep their New Year’s resolutions. Call it a resolution if you want, but make sure there are both goals and action plans.

A target and a Path

When I set a goal, it has to be important enough to keep me motivated and big enough to produce change. Too often, we don’t set goals that are specific enough to be important. For example, “lose weight” is the number one New Year’s resolution. However, “lose weight” doesn’t have a lot of meaning. Losing weight is pretty easy. A pound is weight. That’s doable for anyone. However, making a real target – “I want to lose 30 pounds by July 1” – gives us a destination.

We can also see the action plan that may be involved. Using our 30 pounds by July 1 example, this person would have to average losing 5 pounds per month. Their diet would have to be modified (there are a host of them that probably work but I am not a dietician). There would have to be an increase in exercise. Having a specific goal allows for a path to be drawn.

Doubting ourselves is a great way to fail to reach a goal. When I say think positively, I don’t mean being delusional and seeing everything through a lens of rainbows and butterflies. What I am saying is that we all look for evidence to confirm what we already think. Whatever our thoughts are, we instinctively look for evidence to support those thoughts. As a result, if I think I can’t do something, I will automatically search for reasons why that belief is true. On the other hand, if I think I can accomplish something, I will naturally begin the process of figuring out what is needed to reach the destination.

Instead of a resolution, how about making some goals and action plans for 2016. Be courageous! Set some goals that are important to you – some that will keep you motivated. Make them specific and go ahead and put a date on them. Develop action plans that will let you know when you’re off track. Believe you can and you will find a way to get to your destination.

What are your goals for 2016? We would love to hear some of your plans.