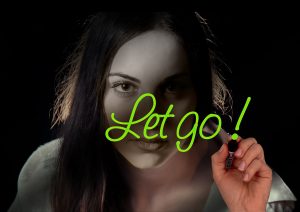 My daughter loves the show “Caillou.” Just typing that word started the theme song playing in my head…again! I hear it several times a day. The song is probably a great song for preschoolers. When it gets stuck in my adult brain – not so much! But it continues to play…over and over.

What events in your life do this very same thing? What past hurts or wrongs from others do you play over and over in your head? Resentment is a powerful thing. It causes us to suffer. We talk about getting past resentment but rarely take steps to do so. We even tell others we’ve gotten past the thing that happened while we secretly play it over and over in our mind.

Someone (either Alice May, Nelson Mandela, Carrie Fisher, or Malachy McCourt) said, “Resentment is like drinking poison and waiting for the other person to die.” Holding on to resentment really hurts no one but me. I am the one who suffers. So how do we get rid of it?

Yes, you were hurt. Acknowledge it. Say it. It is true. Sometimes, resentment hangs around because we try to mask the hurt. We do this to try to make ourselves feel better about what happened. Getting past resentment requires that I be honest with myself about my own hurt. This means that I stop trying to mask it and let it be what it is – hurt.

Continuing to ruminate about it is like sitting around waiting for the past to change.

Here’s a secret – it never will.

Determine What Resentment Actually Does

What does it really do? Resentment does nothing to the person who hurt us. It doesn’t inform them of our hurt, doesn’t get them back, and doesn’t help them change. What resentment does is cause me to ruminate about the event(s) over and over and be miserable. It really is emotional poison.

Indulging in the past is a sure-fire way to not move forward. Getting past resentment requires that I allow the past to sit in the past. Continuing to ruminate about it is like sitting around waiting for the past to change. Here’s a secret – it never will. It is done.

There are a lot of definitions for forgiveness. None of those I have read quite get there for me. So, I have my own two-part definition of forgiveness. Part one is to accept that I am not owed anything. The person can’t erase the hurt. So there’s nothing owed. Nothing they can give or do will erase what has been done. Period.

Part two is refusing to let the event(s) control my emotions and behavior. This is just a matter of practicality. Often, the person who hurt us has forgotten about the hurt they caused us. In some cases, they never knew about it in the first place. Resentment allows the other person to control our emotions without even being around. These emotions might be anger, fear, sadness, feelings of self-doubt, low self-worth, poor self-acceptance. Getting past resentment requires that I no longer let past events control my emotions today.

All of us have had resentment at some point in our lives. What things have helped you get past resentment? Feel free to comment. We would love to hear from you!