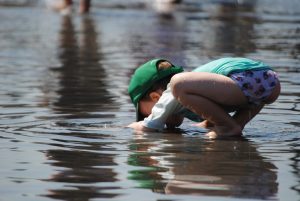 Stop that! Don’t do that! Quit hitting your sister! Don’t you dare throw that! What’s wrong now? Because I said so! Sit down and don’t move!

Any of that sound familiar? If you have a toddler, you may have said all of those things before 9:00 AM this morning! To call this time in your and your child’s life exciting is a tremendous understatement.

Toddler behavior can be difficult to manage. When children get to about 2 years old, things change a bit. There’s a reason this time is called the “terrible two’s.” At this age, children begin to see themselves as separate from their parents and caregivers. Because of this, they begin to assert themselves. They have needs, ideas, and desires. They want to express these and also get some independence.

Toddler behavior is guided by emotions, not logic – or at least not logic that we adults understand. The problem is, toddlers don’t have the ability to handle strong emotions very well. What’s more, they have strong emotions about everything. If you’re past the toddler stage, don’t worry. You get to experience this part again when they’re teenagers!

Since toddler behavior is guided by these wildly swinging emotions, their behavior changes just as rapidly from one moment to the next. This is why she is angry and yelling at you one moment and hugging and kissing you the next. It’s why he hits his sister with a toy then kisses the boo boo he made. That said, helping children learn to handle strong emotions is an important part of dealing with toddler behavior and sets the tone for the future.

Once they reach the toddler stage, your child has all sorts of emotions. He feels frustrated, angry, sad, happy, joyful, and proud. Some ways to help children manage these emotions is to help your child label them. Help them use words to describe how they feel. In the moment of terror, that is difficult, if not impossible. However, at other times, there are some things that can help.

Reading books and talking about how the characters might feel after an event. Talk about how characters in coloring books might be feeling. Draw pictures with your child to help them express how they feel. These things should be done when there is not an active crisis. She will learn to use words – instead of wild behavior – to express herself.

Consistency is the best gift you can give your child.

End Problems Before They Start

Remember, your toddler is trying to find some sense of independence. Offer choices as much as possible. For example, “Do you want me to put you in your carseat or do you want to get in yourself? Do you want an apple or a banana for a snack? Do you want to wear the pink shirt or the purple one?” Giving choices gives a sense of power to your child but also keeps the options within reason.

Help them practice self-control by playing games that require taking turns. This also helps them learn to build relationships and see the value of being involved with others.

Help your child learn to wait by using a timer or finding another way to stay occupied. For example, give him a puzzle to work, picture to color, or a game to play while you fold the laundry.

This may be the most important part. Your toddler probably won’t master self-control until later (hopefully!). Don’t beat yourself up too much. Toddler behavior is unpredictable and changes rapidly at times. Give yourself some grace and just stick with it. Consistency is the best gift you can give your child. If you provide consistency, things will gradually get better and your child will be just fine. Hang in there!

What toddler behavior problems have been the most difficult for you? Feel free to comment. We would love to hear from you!