Fear of Not Measuring Up: Confessions of a Perfectionist 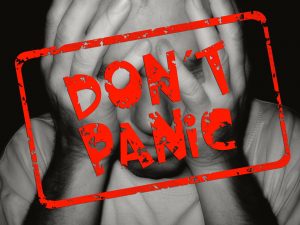 Confessions of a Perfectionist

Do you hate mistakes as much as I do? I don’t mean others’ mistakes. I mean yours. This is one of my biggest fears – that I will ultimately get it wrong. It doesn’t even matter much what the “it” actually is. It can be big or small. This is the plight of a perfectionist – operating under a fear of failure.

I have had a hard time with this, to varying degrees, over the years. Usually, I overcame my desire to check every detail, revise, check again, revise again, rinse, repeat. At other times, I would simply abandon the project because I thought it was too risky to let an inferior product leave my hands. So, as a recovering perfectionist, I have had to let go of those tendencies to check, revise, and check again.

Being a perfectionist has had its advantages at times. I could see details everyone else overlooked. I could break large systems apart into the small processes and find the problems. As a perfectionist, I would always see the problem. Yet, I also have a tendency to see things as never quite good enough. This was always helpful when I was trying to improve something. I could dissect it and dig out the problem. This became an asset for me over time. I could improve nearly anything.

Perfectionism is Ultimately an Enemy

As a recovering perfectionist, I am able to recognize that my constant desire to improve my work was more than an appreciation for quality. This was how I rationalized it to myself. “I’m not a perfectionist. I just think things should be as good as possible.” Sounds great, right? Here’s the problem…

My perfectionism had nothing to do with quality. It had everything to do with fear. When I feel the need to go beyond what a reasonable person would doing the same task (feel free to fill in the task for you), I am probably doing so out of a fear that I don’t measure up. Think of that. I feared not measuring up so much that I put totally unrealistic expectations on myself. Sound familiar? 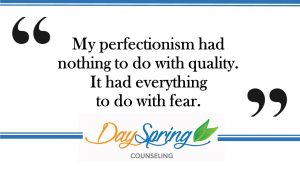 Getting Over the Fear

For me, I had to look at the evidence. The truth is, there are some things I am not great at doing and some other things I do pretty well. There are even a few things I do better than most. I had to come to the conclusion that I might not measure up to a particular standard on some things. Guess what? I don’t do those things! However, for the things I do, I made some changes.

I decided I would actually trust what people say. If they told me I did a good job, I believed them. If they told me something needed changed, I considered their feedback and didn’t assume I was hopelessly flawed and need a complete overhaul of who I am as a person. That sounds ridiculous, doesn’t it? Of course, it does. Yet, this is what I did as a perfectionist. Any minor error, mistake, misstep, or even downright failure was given a lot of meaning. It meant that I failed as a human being.

Fortunately, over time, I have overcome this fear to a large degree. I still have my moments of self-doubt, but they are fewer and farther between. I would encourage you to work on your self-acceptance. In my experience, this will go a long way in helping you to be less of a perfectionist. Lots of people love you and care for you just the way you are. They’re not wrong.

Have you struggled with self-doubt? What have you done to help overcome that fear?