Changing Addictive Behavior: A Conversation with an Addict

A Conversation with an Addict

I had an interesting discussion with a former addict. He related to me how he had to come to the conclusion that what he was doing wasn’t working and gave me some of his process for changing addictive behavior.

I realize changing addictive behavior is an individual process that has a lot of different aspects. I also recognize how this conversation may not fit perfectly within theoretical models in the field of addiction. Of course, this shows us that no single theory or model is likely to be complete for any given person. Nevertheless, here are some of his thoughts about changing addictive behavior.

The most profound statement I heard from this man was, “You can’t trust an addict. You can’t believe them. What they say is all made up.” This man told story after story about how he lied to family members about needing food, money for electric and gas bills, and a host of other things. He even talked about going to his neighbors, whom he had never met, and told them he needed money for gas to take his wife to the hospital.

Changing his addictive behavior required him to be honest with others, but most importantly, himself. “I had to decide that I actually had a problem that needed fixed.”

What is real help from other people? The answer shocked me. One statement in particular was, “I wish my mother would have done less for me.” Exploring this, I learned that his mother was enabling his drug addiction. He also said, “Real help is taking me to rehab, putting me in jail, or cutting me off and forcing me to take responsibility for my own life. People think it’s cruel, but it’s not. It’s cruel to keep enabling an addict.”

One thing I learned is that from his perspective, changing addictive behavior requires the addict to not have any enablers helping them stay addicted. Most addicts have enablers in their lives and the enablers have to come to a point where they stop enabling.

Addicts often talk about making decisions to stop often. According to the National Institute on Drug Abuse, only a third or fewer addicts stay abstinent if they have been clean for less than a year. In other words, if they haven’t made it a year, there is a 2 out of 3 chance they won’t stay clean. This is consistent with my conversation. He related, “I wanted to quit in brief periods of time. I would say it all the time, but I never did it.” 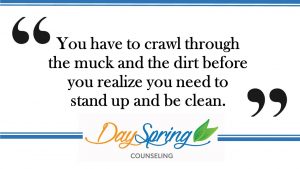 These findings were also consistent with my conversation. “I had to go to jail enough that I was tired of going. That’s what really made the difference. That caused me to finally realize what I was doing was not working at all. I wanted to be free, but it took a lot of negative things in my life for me to come to that conclusion. People had to stop helping me avoid the consequences. I had to face them.”

One profound moment in my conversation was when this man said, “You have to crawl through the muck and the dirt before you realize you need to stand up and be clean.”

Once this occurred, he was able to make changes in his life. He had to change his thinking. He had to deal with hurts. He had to overcome guilt and shame. “There was a lot to overcome, but I finally made a commitment to staying off drugs.”

Everyone is different. Maybe this conversation doesn’t “fit” for you, or maybe it does. Maybe you have a family member that can benefit. Either way, I am grateful to have learned from this man who has made, and is continuing to make, changes in his life. It has taken a lot of strength and courage to do so.