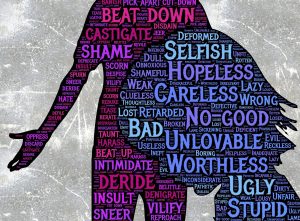 Bad things have happened to all of us. For some, the past haunts them. Things like sexual abuse, neglect, physical abuse, or abandonment were part of their childhood. In our professional counseling practice, we often find adults who have had these kinds of life experiences. They tend to struggle with several different things. One of the most common is problems with self-blame.

It is rare for an adult to say, “That was my fault” when they’re talking about an abusive childhood experience. Many realize that’s going a little too far. However, they make other statements that indicate the same thing. Without saying, “It’s my fault,” they still blame themselves for negative events that happen not only in their own lives, but the lives of others.

There is a note of caution here. When we talk about getting rid of self-blame, that does not mean I don’t take responsibility for things for which I am responsible. I make my own decisions too, and I am always responsible for those!

Reading these, it doesn’t “feel right” for a lot of us. We read these statements and think, “How could someone believe those things about themselves?” These are real beliefs from real people. As a mental health professional, part of my job is to help people challenge and change these beliefs because they simply aren’t true.

Give yourself the gift of letting go of the “bad me” image and realizing you’re pretty awesome. You made it this far through some terrible circumstances. Let others be responsible for themselves and do the same for yourself.

As we have previously discussed, beliefs come from experiences. Children aren’t born with a belief that every bad thing that happens is their fault. These beliefs develop over time. When children have repeated negative experiences, they develop a strong, firm, hard-to-change belief there must be something wrong with them. This often carries over into adulthood.

As a mental health professional, I see people engaging in this a lot. When someone close to them makes a bad decision, I hear things like this:

What these statements say is who I am as a person impacts the world so much that it causes other people to make wrong choices. That’s pretty powerful. It is understandable how these ideas are developed. If a child has repeated abusive experiences, they come to the conclusion they are causing the abuse. Taken a step further, they were responsible for the abusive individual making the decision to be abusive. This gets taken even further to believing they are responsible for the bad things that happen to others around them.

Self-blame, in this context, is a way for us to try to be better. Since some flaw in who I am caused the past abuse, I have to fix everything around me, especially people, to prove that I am now fixed. It’s as if we are showing the abusive person, who may not be anywhere near us, their abuse worked. It helped us fix all of the things wrong with us. It sounds ridiculous, but our beliefs are rigid – they don’t change easily – and they guide a lot of our behavior.

You are Responsible for You

Seems like a no-brainer, right? Maybe, but it’s not easy. Tell that scared, guilty child inside you those words over and over. Imagine a friend in your situation. They had your life experiences. Would you blame them? What would you say to them about their self-blame? It is likely that you would not tell your friend to continue blaming themselves for the bad decisions of others.

I invite you to give yourself this same gift of letting go of the “bad me” image and realizing you’re pretty awesome. You made it this far through some terrible circumstances. Let others be responsible for themselves and do the same for yourself.

What ways have you held yourself responsible for past abuse or the bad decisions of others? We would love to read your comments.